The modern Auxiliary Police Unit started in 1970 through a grant from the Law Enforcement Assistance Administration.  Some of the original members of the Unit were members of the City of Decatur Civil Defense Unit.  Others were civic minded citizens that answered the call from the City to volunteer their time in assisting the Police Department.

After the initial training period in the winter of 1971, the first officers were sworn in by the City Council in May of that year.  The Units first major activity was to provide traffic direction and crowd control for the Memorial Day boat races on Lake Decatur.

In the years since its beginning, the Auxiliary has provided traffic control and security for almost every public event, parade, walk, run, bike-a-thon, march, and for the Decatur Celebration.  Auxiliary officers have played an important part in assisting the Police Department during times of natural and man-made disasters within the City.  Hundreds of hours have been logged at major fires, explosions, floods, and severe storm damage areas.

The Auxiliary has experienced unprecedented growth in the number of requests for its services. In 2017 the Decatur Police Auxiliary Unit provided the City of Decatur with over 5,200 hours of service at public events, riding as second officers in squad cars and in continuing education and training to maintain and improve the services provided to the Department and the citizens of Decatur. 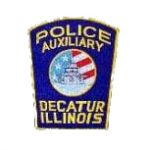