Our elected officials and city staff are often asked how the City receives operating money and where the money is spent. Following is a brief explanation of the types of revenue that come into the City and how general operating funds are spent.

First, residents of Decatur pay personal property taxes each year with the City receiving 16% of the total property tax bill. As you can see from the illustration below, Decatur schools receive the highest percentage of property tax dollars (46.6%). 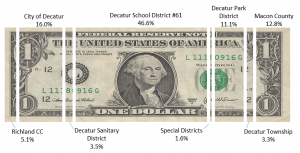 Next, how is the City’s 16% portion of property taxes allocated within the City budget? In the 2020 budget year, the City will receive a total of $14,187,159 in property tax revenue according to the Macon County Tax Extension. The following chart shows where that revenue goes. Police and Fire pensions total 64.14% of the allocation. The Illinois Municipal Retirement Fund (IMRF) is the pension for all employees not included in the Police or Fire pension plans. This year’s budget for General Fund IMRF is $1 million, and none of that expense is included in the current tax levy. As you can see below, the City receives no other revenue into the General Fund from property taxes. The general fund operates most of the City’s services. 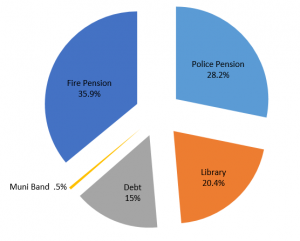 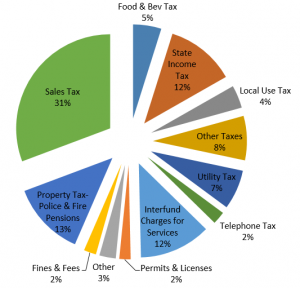 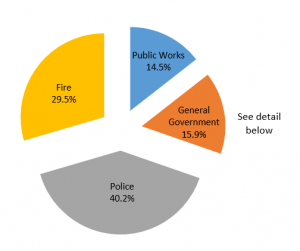 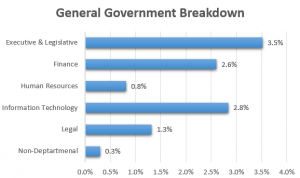